Amanda LaGrange is the CEO of Tech Dump and sister company Tech Discounts. Tech Dump and Tech Discounts is a Twin Cities based social enterprise that uses electronics recycling and refurbishing as a workforce training tool working primarily with individuals coming out of incarceration or in recovery from addiction. They use their model of recycling and refurbishing as both the funding tool and laboratory of their training.

We had the opportunity to sit down and chat with Amanda about what it is like leading this exciting venture and here is what she had to say.

Tell me a little bit about yourself?

I am originally from Indiana and I’ve lived in Minnesota now for almost 12 years. Growing up, I loved to play “business” so no one was surprised when I studied business in school. The social enterprise movement was picking up at this time and I had this dream of how can we use business for good. Serendipitously, I found Tech Dump right at the perfect stage in my career. Now we have plenty of examples in the Twin Cities of how you can use business for good and Tech Dump is right there on top.

Where did the idea for Tech Dump come from?

The idea began in 2010 when finding employment was tough and even tougher for people who had some challenges in their past. The business model of how do we make money and employ and train individuals with some sort of barrier was the main question we were trying to answer. We played around a bit with other products such as cars, skis and snowboards and other things and eventually moved to electronics. Electronics seemed to make a lot of financial sense because there are lots of commodities inside of them that can be fixed and sold. Furthermore, it is easy to train people on how to fix them. It ended up being the best business model out of anything we have tested before so we went with it and it took off. 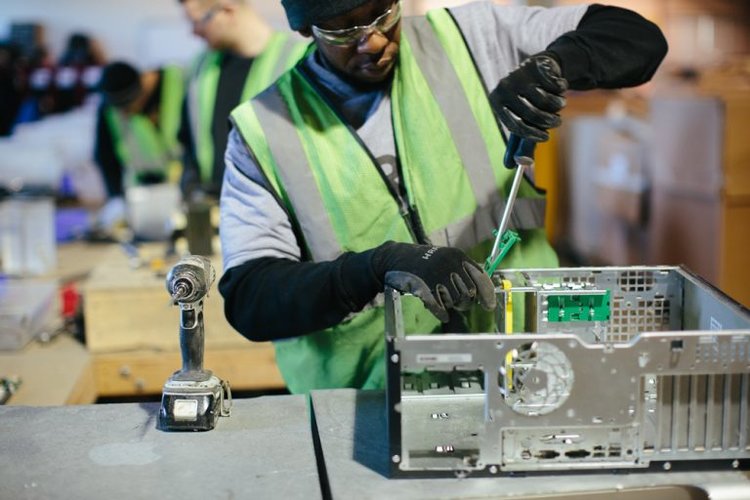 How did you come up with the name Tech Dump?

What were some of your failures along the journey?

There have been many failures launching a start up social enterprise however a couple of pivotal moments of my own failures stick inside my head. In college, I remember when I walked out of exam and felt like I knew nothing. I was really upset so I called my parents and after talking to them, I realized that I was the one pushing myself. That revelation was truly helpful as it made me realize that I was a perfectionist and I’d have to work on allowing myself the opportunity to fail.

When I worked in corporate finance, I soon discovered that there is not a lot of room for failure. It was a very different world and that was difficult for me. After that, I left and entered into start-up land. It was a huge culture shock. There are no training wheels or bumpers along the way. You can easily make the wrong decision and that is very scary.

I first joined Tech Dump as Director of Marketing and I had to learn all about testing and learn to accept the concept that you are not going to have things perfect when you first test them. It was very different from the corporate world where you had it all done right immediately.

A lot of my journey at Tech Dump has been about trusting my gut and it has been really hard when I have a perfectionist personality. One of best things is realizing that I fail all the time and that is how I learn and grow. It is ok to not be perfect. Then the big failures are not so scary and by taking chances, you can ultimately learn and succeed.

I’ve also learned that it is harder to accept failure in the social impact sector as it impacts people that are already facing challenges. The weight of it feels so much different than in the corporate world. There are amazing humans tied to those failures. It is harder to talk about it but we must talk about failure as it helps us grow.

Why do you think we are so adverse to failure?

For me it is because I hate the thought of letting someone else down. I also don’t like letting myself, my team and the community down. It is our human nature to want to be liked and loved. We all have this desire so failure is very difficult. I believe there is way too much expectation put on people to be perfect rather than allowing them to be themselves and talk about failure. There is so much to learn from failure if we can accept it, talk about it and grow from it.

Do you think failure is necessary?

I believe that failure is necessary. It keeps us all humble and helps us make better decisions. Early on as CEO, I struggled to find my voice especially because I was only 30 when I was named CEO and all the media attention around my age made me doubt myself at times. But eventually I learned through failure.

Here is an example. In Spring of 2016, Tech Dump spun off Tech Discounts. Soon after, we opened a second retail location in Bloomington. The opening was beautiful and the store was perfect. Yet a mere 18 months later we closed store because it was not performing well. Customers and others may have thought of it as a failure but we looked at it as a learning opportunity. We learned what we had done wrong and also we realized that our other store in Golden Valley did better so in total our business was better with just one store. We learned a ton from it and I look at it very positively, not as a failure.

How do you stay positive in the start-up world?

I try my best to stay humble. I keep it in balance. Being surrounded by fellow entrepreneurs is a huge support. Finding the people you can be real with and who will keep you on track. One of advantages of a nonprofit is you are held accountable by a Board of Directors.

As a leader how do you encourage your team to take risks?

I do this by learning how my own fear of failure started to impact my team. Once I realized this, I made sure to instill a common belief around failure. I tell my team that we are striving for excellence but not perfection. Ever time there is a failure it is a learning opportunity and we strive to create the right response. I remind myself and the team constantly, “Let’s see what we learn” and I don’t let my own fear of failure impact others.

I feel that the social impact space is the perfect spot to model this example. To take risks in a supportive environment and learn from them.